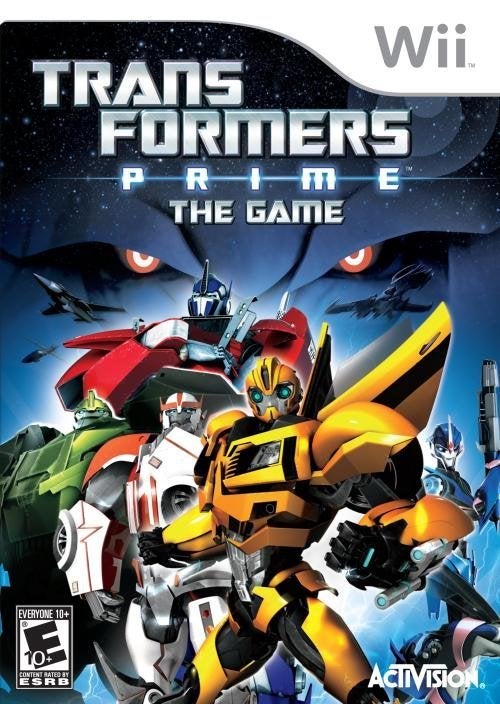 Based on the smash hit TV show on the Hub Network, TRANSFORMERS PRIME challenges players to join forces with the AUTOBOTS and teens Jack, Miko and Raf as Team Prime to save mankind. The evil...
Read more

Based on the smash hit TV show on the Hub Network, TRANSFORMERS PRIME challenges players to join forces with the AUTOBOTS and teens Jack, Miko and Raf as Team Prime to save mankind. The evil DECEPTICONS have intercepted a Dark Energon meteor heading to Earth. MEGATRON, their leader, intends to harness the power of this meteor for his own sinister purposes. With humanity on the brink of survival, players will take control of OPTIMUS PRIME and other fan-favourite characters to stage an epic assault on MEGATRON's army to prevent a devastating explosion from destroying the earth! Transformers Prime is a third-person action-brawler with a mix of shooting, driving and melee combat. Change form and power up each AUTOBOT as you battle against the DECEPTICONS. The AUTOBOTS change according to the levels you are in and each has a specific ability unique to their character. ARCEE changes into a motorcycle and is very quick and acrobatic with her attacks, and BULKHEAD changes into an armoured truck and moves slower, but hits much harder. Play as all of the AUTOBOTS: OPTIMUS PRIME, ARCEE, BUMBLEBEE, RATCHET and BULKHEAD in single player campaign. Battle against DECEPTICONS including MEGATRON and STARSCREAM, and a secret character never seen before in any TRANSFORMERS game! TRANSFORMERS PRIME includes human characters Jack, Miko and Raf who display a growing friendship throughout gameplay helping the AUTOBOTS save the Earth from MEGATRON and his new secret weapon. The game takes place across a myriad of levels starting in Space, to different locales around the planet such as Greece, Nevada and South America. Multiplayer mode offers different battle action experience from the single player story mode. It features 11 playable characters including AUTOBOTS and DECEPTICONS in several modes including Brawl, Battle for Energon and Emblem Match.

Other brands in Nintendo Wii Games